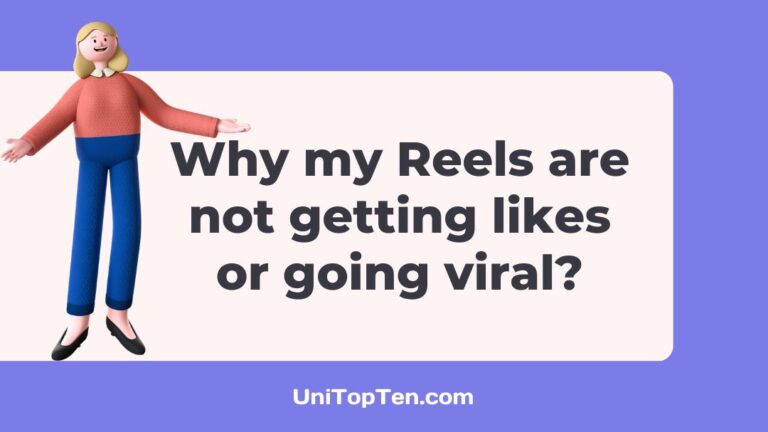 Views and audience have skyrocketed in several situations.

However, just because you are making Reels doesn’t imply that your account size will increase exponentially overnight.

As a matter of fact, many users could be struggling to attract attention to their Reels.

If you’ve posted many Reels to Instagram but seen a little number of likes in the app’s analytics and in case you are wondering why your reels aren’t going viral, this article is for you.

Why my reels are not getting likes?

Short Answer: Your reels are not getting likes because you may be using reels from other platforms, you may not be publishing reels often enough or uploading low-quality reels, you may not be utilizing Instagram’s built-in reel-making tools, or you may not be including relevant hashtags in your posts.

1. You use already used Reels from other sites.

TikTok watermarks are useless against Instagram’s sophisticated AI, which can analyse and identify the content of your videos.

You are free to reuse material from other social network accounts.

But, to avoid downloading the video with the branding of another platform, we recommend either recording the video on your screen or using a watermark removal application.

2. The quality of your videos is low.

There is no longer any justification for posting low-quality films on social media. Instagram is aware of this and strictly enforces it.

Now that even budget smartphones can boast respectable cameras, Instagram has no room for low-quality posts.

3. To make a reel, you don’t utilize Instagram’s features.

Instagram’s goal is to have posts that seem natural on the app.

Instagram’s reach for your reels might drop if you modify them elsewhere.

4. There aren’t a lot of reels on your page.

You can’t just upload one reel and hope that it becomes viral and reaches millions of people.

On the contrary, your reach and engagement will increase gradually as you publish more often.

5. You are not making the most of your Reels.

Include interesting and unique descriptions, hashtags, tags, and geographical information when posting your Reels online.

Why my reels are not getting viral?

Short Answer: If your reels aren’t going viral, it’s probably because they lack a compelling visual or audio element, a strong hook, regular uploading, or all of the above. And if your reels aren’t informative, motivational, or engaging, they won’t go viral.

1. Your reels are not visually appealing.

If your reel doesn’t grab their attention, they may never get to your content.

The video has to be interesting in some manner for the viewer to pause while scrolling.

2. Your reel doesn’t have a strong hook.

When people watch your reel, the opening few seconds are critical.

It’s crucial to plan out the hooks that will keep your audience captivated until the very end.

3. You don’t have a regular schedule of uploading reels.

Instagram has acknowledged that the success of all of your reels is tied to your consistency and frequency of posting.

In other words, you can’t expect your reels to go viral if you don’t keep up a constant release schedule.

4. Your reel doesn’t fit within one of these three categories.

Your reels will not get a lot of views if it doesn’t include something that others can relate to, learn from, or be inspired by.

To increase the chances of your reel going viral, you have to make sure they fit within the educational, inspirational or relatable category.

5. The quality of your lighting and audio is poor.

Be sure the lighting and audio on your reels are up to par.

As Instagram is mostly a visual medium, if your reels aren’t interesting, users will quickly move on.

How can I get more likes on my reel?

According to Instagram, the success of your Reels will rely on how often you post them. It’s unrealistic to expect everyone to make a new reel every week.

Instead, promise to upload at least one Reel weekly and maintain a regular schedule if you want to upload more often.

In order to save time in the long term, you should think about making reels in batches.

Once your content has gone viral, don’t stop posting it; instead, use the momentum you’ve built up to your advantage and keep the momentum going with another post.

Method 2: Make use of the appropriate hashtags for Reels

Using hashtags improves your chances of becoming viral because Instagram can classify and recommend your Reels to people it thinks would be interested.

To make your Reel trendy, you need to include the appropriate hashtags:

You may use up to 30 hashtags per Instagram post, and you should utilize all of them on your Reel if you want it to become viral.

Method 3: Put a unique spin on established trends in Reels.

If you’ve chosen to ride the wave of popularity on Instagram Reels, here are some guidelines to help you succeed:

1. You should study your audience and watch a lot of Reels to figure out what kinds of reels content will appeal to them.

2. Realize that it’s not enough to just recreate a popular video if your own material fails to capture the essence of the original.

3. Make it your own; no one likes seeing the same Reel over and again, and your fans are there because they like what you’re putting out there.

Method 4: Make use of popular and fitting music.

Instagram’s algorithm will show more videos of that kind to more people if it determines that those users are interested in seeing them.

The frequency with which users are using a certain song in their videos is one indicator that the platform might utilize to deduce this information.

A song or sound will be highlighted as a suggested track if it appears on numerous Reels.

You may increase your chances of gaining new fans and viewers and going viral by using one of these well-known songs.

Method 5: Make a video that works well with reels.

Even while it’s perfectly OK to create your viral reels on your phone, you should shoot in a well-lit area with good acoustics.

Use a ring light if necessary to illuminate your Reel.

Clear the air so that your narration and/or music may be heard without distraction.

Videos uploaded to Instagram Reels should be 1080px wide by 1920px high (9:16 aspect ratio), to provide the best possible viewing experience for users.

If you want your viral Reels video to look its best and include everything you want it to, film it in the vertical orientation.

Make good use of Instagram’s in-built Reels filters and stickers.

Pretty much everybody wants people to click on your content whenever they see it in their feed or in the Reels feed.

A catchy cover that effectively summarizes the post’s worth with a picture and title might encourage readers to tap through to the content.

There are a few common causes for this: the employment of bots to “like” or “comment” on other people’s postings, the use of spammy or otherwise improper hashtags or having an excessive online presence on the platform.

How many views does it take to make a video viral on Reels?

Whether or not a certain amount of views qualifies as “viral” will depend totally on the metrics you’re already using.

Wikipedia defines a viral video as one that has over 5 million views in 3–7 days.

However, on Reels, being viral simply means that your material is being seen by more people than it otherwise would.

Is there a recommended maximum number of hashtags for a Reel?

You may use 30 hashtags in your feed updates and Reels, but only 10 in your stories.

Adding as many as possible could seem like a good idea at first, but it may not be optimal.

There is no one factor that guarantees that a piece of material will go viral on Instagram Reels since so many different kinds of content may.

In this piece, we’ll go through some of the steps you may take to make your Instagram clips go viral.

There’s a possibility your Reel may be published on Instagram’s Reels section if you follow the instructions mentioned above.

[15 Fix] Why my Reels are not getting views